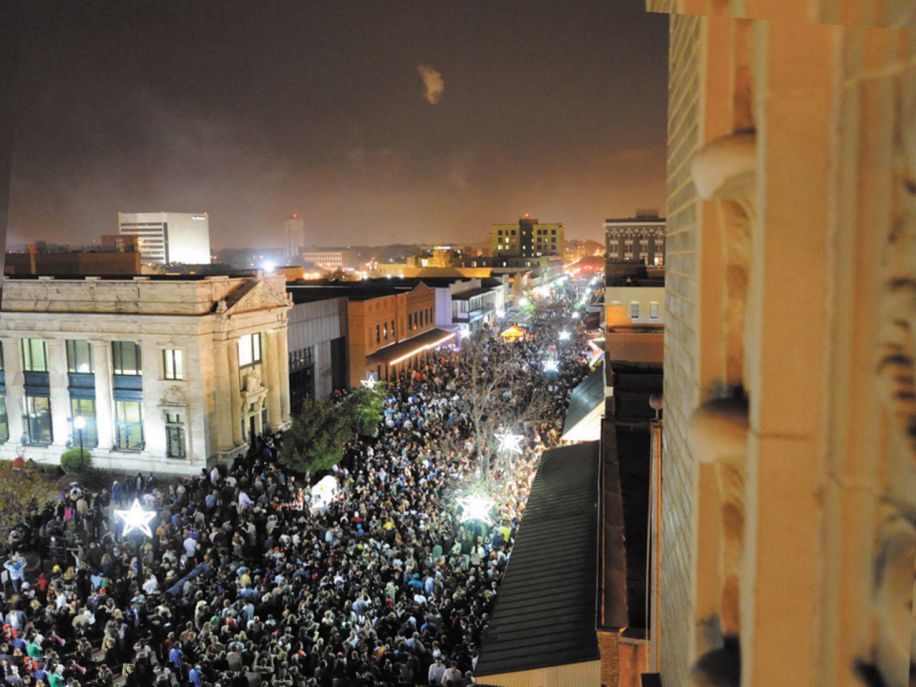 PNJ.com by�Jim Little The Pelican Drop will happen at Blue Wahoos Stadium in a family-friendly format this New Year's Eve, but a group of downtown business owners hope to have a grown-up celebration downtown. Several downtown bars have banded together to put up the money for a fireworks display. They also hope to close off the streets downtown, much like Gallery Night. The News Journal reported in November that the group that stepped forward last year to raise the $100,000 needed to put on the Pelican Drop downtown will not be organizing the event again this year. Shortly after that, Quint Studer, owner of the Blue Wahoos, announced the team will host a family-friendly Pelican Drop at its stadium. The event will start at 5 p.m., with the countdown, drop and fireworks at 8 p.m. Warren Sonnen, manager of O'Riley's Irish Pub, told the News Journal that when downtown bar owners learned the street wasn't going to be closed on New Year's Eve, they came together to try to change that. Right now, organizers are now working through the city's permitting process. "The main motivation for a lot of businesses on Palafox is we know it's going to be busy, and for safety reasons we wanted to at least close it, so we didn't have any issues on the actual Palafox Street," Sonnen said. Sonnen said along with O'Riley's, several downtown business have offered to contribute to the cause, including Seville Quarter, New York Nick's Badlands Roadside Bar, the Tin Cow, Hopjacks Pizza Kitchen & Taproom, Wild Greg's Saloon, World of Beer and others. "Most of the big guys are stepping up to help because they feel like this is really important and should still happen," Sonnen said. The business owners have also raised money to put together a fireworks display at midnight. The Escambia County Commission voted Thursday night to let the group use the county's downtown parking garage to launch the fireworks. "I think a lot of people want something to do on New Year's, and I think it's great what Quint's doing in taking the family stuff with the Pelican Drop down to the park," Commissioner Grover Robinson told the News Journal on Thursday. "...We wanted there to be something for the vendors on Palafox, and they were expressing that they wanted something to attract people to Palafox as well. This way you get that and you get fireworks, too." Sonnen said he's not sure if the streets will be closed yet as they are still working with the Pensacola Police Department and the city to determine the cost. Vernon Stewart, spokesman for the city of Pensacola, said the city hadn't received a permit application for the event yet. "It's going to come down to the wire," Sonnen said. Buck Mitchell, marketing manager for Seville Quarter and one of the organizers of last year's Pelican Drop, said he will help with this year's event. "Downtown was always going to be the place to be on New Year's Eve, and you can count on downtown for the countdown," he said. Jim Little can be reached at [email protected] and 850-208-9827.