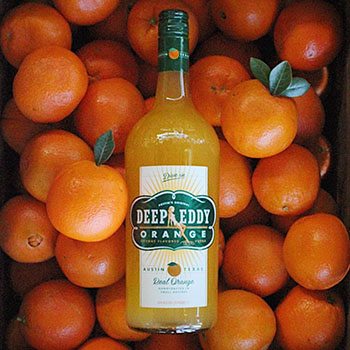 Booze of the Month � Deep Eddy Orange Vodka � � � � � Austin Texas�s Deep Eddy has just introduced its� sixth flavored vodka, Deep Eddy Orange. Deep Eddy is Texas proud and uses Texas corn combined with pristine water from a secret local aquifer. They then distill real oranges, not concentrate or powders, into their base vodka for an authentic orange vodka that�s not overtly sweet like so many flavored vodkas are. ��������� The Gluten Free Deep Eddy Orange makes a killer spiked mimosa, screwdriver or just unadorned on the rocks. Seville Quarter Bartender Marena Bracaloni gave it a big thumbs up and said it was the best orange vodka out there. ��������� Deep Eddy is now the fastest growing spirit brand in America and the orange will only add to its� success. Deep Eddy takes its name from the historic Deep Eddy Pool in Austin, the oldest spring fed pool in the state. ��������� Be sure to give Deep Eddy Orange Vodka a try in your next cocktail at Seville. The taste of Texas with a little Florida sunshine added in.